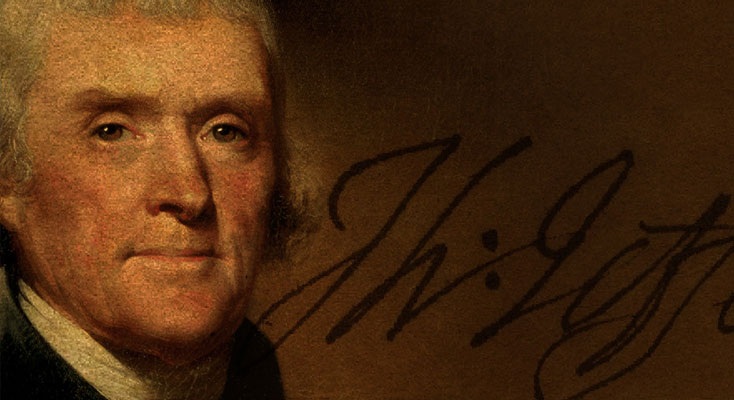 Thomas Jefferson was fed up. For more than 15 years, he had been fighting to convince the American government that something needed to be done about the hostage crisis along the Barbary Coast of North Africa.

For centuries, state-sanctioned pirates from Algeria, Tripoli (now Libya), Algiers, and Morocco, had been aggressively pursuing European and North American trading vessels, sometimes merely stealing the ships’ cargo, other times capturing the crews and holding them as slaves until exorbitant ransoms were paid. Other countries could pay an annual “tribute” to the leaders of each of the Barbary nations in return for a promise to be left alone, but the newly-independent United States (which could no longer claim protection under the British flag) could hardly afford to meet these demands. In 1795, more than ten years after Jefferson picked up the cause, tribute payments to Barbary rulers made up more than 16% of the entire national budget, and the demands continued to increase. The nation was on the verge of bankruptcy to pay off foreign terrorists.

Enough was enough. When Jefferson was sworn in as president in 1801, after a bitter and hard-fought campaign against John Adams, he was determined that the harassment and endangerment of American lives would not continue.

Perhaps surprisingly to modern Americans, Jefferson’s stance as not a popular one at the time. The country was deeply in debt and still war-weary from the revolution. In order to effectively fight, America would need to build a navy almost entirely from scratch and send sailors and Marines to carry the Stars and Stripes into battle in a foreign land for the first time. Many voters felt it was a reckless choice and that the Adams administration would have governed with more caution. Jefferson’s proposal was a daunting prospect, but it was also a necessary one in which he believed deeply.

Last year, I had the privilege of writing the New York Times best-selling Thomas Jefferson and the Tripoli Pirates: The Forgotten War that Changed American History with my good friend Brian Kilmeade. The paperback is released this week and includes a new chapter that takes a closer look at the experiences of American captives held hostage by the Barbary States.

In our research for this book, as well as for the new material, I was continually impressed by Jefferson’s command of effective leadership. He was no war hawk, yet he recognized that swift, decisive action was the only way to reach a conclusive victory over a longstanding problem with far-reaching implications. Jefferson did not shy away from his vision of shaking off the tyranny of terror from a foreign government. His convictions were not the whims of a few brief encounters, but the meticulously researched policies of a man who truly sought to understand his enemy. After several interviews with ambassadors from the Barbary States, Jefferson committed years to carefully studying the Koran and the governmental policies of those nations in order to have as full an understanding of the philosophies and practices of those whom he opposed.

When his time came to finally take the helm of the nation, he was already armed with policies and plans to lead the country in the direction it needed to go. As a result, he extended tremendous autonomy to his most trusted senior military leaders to act boldly in the moment to respond appropriately to whatever sudden turn the conflict took. He also understood that a strong stance on a real and pressing problem would be an important step in healing a nation divided after a contentious election.

These lessons are very applicable to any leader facing a rival organization, and to anyone in the position of considering the most important qualities of a new leader. As our country faces Election Day after a long and less-than-cordial cycle, not unlike the one Jefferson and Adams had in 1800, it is worth pausing for a moment and taking into consideration the model of leadership that Jefferson set. His action was unpopular and unprecedented, but Jefferson did everything he could within the constraints of the Constitution to take necessary action for the country’s future. His decisions proved effective, ultimately uniting a divided populace—and the nation’s future was more secure for it. Jefferson also understood the effectiveness of delegation and trusting those leaders to do the right thing in carrying out his plan. True, a few let him down, but the majority stepped up to meet the challenge and were able to counteract any failures on the part of weaker leaders by their own bold leadership.

Whatever way you cast you ballot on November 8, whatever way you lead your team every day, do it boldly and with conviction. Invest yourself in the preparation, assemble a team of people you can trust, and step out with confidence in the direction you believe is right.