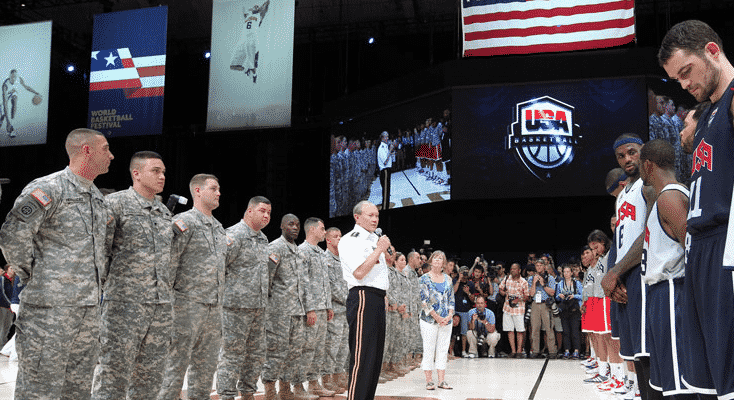 Editor’s Note: I thought I’d share with you a story that ran in today’s Wall Street Journal that I had a chance to experience.

How do you get some of the world’s wealthiest athletes to perform—in peak form—during their summer vacation?

This is USA Basketball’s eternal quandary. It is a challenge that only got tougher last month, when Paul George gruesomely broke his right leg during a Team USA scrimmage.

But over in Spain, where the U.S. will play for the FIBA World Cup title on Sunday, Mike Krzyzewski believes he has the answer. It is a bit sentimental, but to this point, you can’t argue with the results. He calls it “feel-it” moments: team visits to cemeteries, trips to military bases, anything to drive home the significance of representing one’s country.

“When it’s time to change the culture of a team, your players have to hear it, see it and understand what you’re trying to do,” said Krzyzewski, the coach of the U.S. national team since 2005. “But to really make change stick”—and when he describes this, he drags out the word really—“they have to feel it.

Those moments have led to a run of success—the U.S. has won the last two Olympics and the most recent World Cup—and have changed the way players feel about wearing the red, white and blue, Houston Rockets guard James Harden said.

“Coach has focused on reminding us what it means to wear USA on the front of the jersey, and not just in a way that sounds like a cliché,” Harden said during a USA Basketball workout this summer. “People ask why we give up time to be part of this team, to risk maybe getting hurt. This is why we play, the kind of passion we need to have not just for basketball but for others.”

Ten years ago, USA Basketball was at an all-time low. At the 2004 Athens Olympics, the U.S. lost three games—it had lost only twice in Olympic history previously—and won bronze. Two years before that, in the 2002 World Championships, the U.S. finished sixth, its worst finish ever in international competition.

Worse, Team USA “had made people not like us,” USA Basketball executive director Jim Tooley said. “In 2002 and 2004 we just threw guys together, gave them 13 days to practice, explained a couple of rule changes for international basketball and expected it was their turn to win a gold. We didn’t show respect for other teams and what they were doing.”

Beyond hiring Krzyzewski as coach in the wake of the Athens debacle, USA Basketball also made a point of getting its players to buy into the meaning of international competition.

“We knew we had ask our players for a new level of commitment than was expected previously and we had to get them to realize we weren’t going to win international competitions doing things as we had,” said Jerry Colangelo, director of USA Basketball. “We needed them to see themselves not as basketball players but as representatives of our country, doing our service, our piece. We had to get them to feel patriotism and selfless service.”

Who better to teach those traits to some of the wealthiest athletes in the world than members of the military, Colangelo said. So the “feel it” moments began.

As part of a collaboration between USA Basketball and branches of the military, Krzyzewski’s team stopped in Korea on its way to Japan for the 2006 World Championships. The team went to two military bases and held open practices, coming into the gym wearing fatigues instead of warm-ups. They met injured soldiers who shared a consistent theme: We have no regrets because we did what we did for our country.

The relationship between team and military grew through a continuing program since dubbed Hoops for Troops. Then, on the way to the 2012 Olympics in London, the team went to Arlington National Cemetery.

“When I think about feel-it moments, I go right to that moment in 2012,” Tooley said. “After our guys laid a wreath at the Tomb of the Unknown Soldier, we went to Section 60, where the latest casualties are buried. The guys kept looking down and the birth dates were for soldiers younger than them.”

And yet, Durant wound up withdrawing from the team before the World Cup, citing fatigue—a move that highlights the difficulty of player recruitment for the U.S.

Durant’s decision came just days after George broke his tibia and fibula at the base of the basket stanchion during an intrasquad scrimmage in Las Vegas. Previously, other stars including Blake Griffin of the Los Angeles Clippers and Kevin Love, now of the Cleveland Cavaliers, also had pulled out. In 2012, Ray Allen said players ought to be paid to play in the Olympics.

“In the weeks before the 2004 Olympics, we had three players withdraw and had to make last-second substitutions, which was a problem for the team,” Colangelo said. “We’re in a better place now because we have players in a pool of talent as part of a program—a program that they get much more than a medal from—rather than as just part of a team, which is what they had before.”

The team the U.S. is left with includes several international rookies, including the Denver Nuggets’ Kenneth Faried and the Sacramento Kings’ DeMarcus Cousins. But as it plays for the World Cup championship, the team will do so with an enhanced sense of pride, Colangelo said.

“I think we’ve helped our players become better people, better players and take this culture back to the teams they play for in the NBA,” the longtime NBA owner and executive said. “You leave these ‘moments’ feeling a lot different about life, about priorities and you’re just better for having felt that way.”

Do you have a “feel-it” moment that reminds you of what’s important in your life? Leave me a comment and let’s discuss your story.

Click here to read the Wall Street Journal version of this story.

If you liked this post and want to inspire someone else with a “feel-it” moment, please consider sharing with friends and colleagues by using the share buttons below.