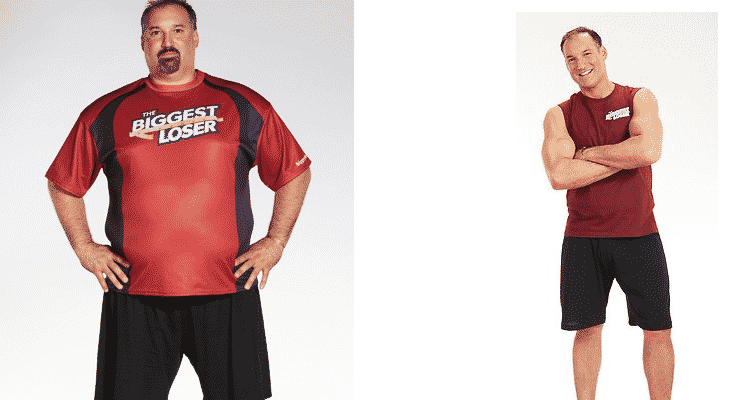 Every once in a while I write about the importance of learning from your losses. No one has learned more than Joe Ostaszewski.

Ostaszewski—former defensive lineman for Florida State University and the NFL’s Miami Dolphins—was recently a finalist and season favorite on the hit-show the Biggest Loser. Ostaszewski fully committed himself to changing his life and went from 364 lbs to 217—a loss of a staggering 147 pounds! Following the show, he has made a personal mission not to only live a healthier life, but also to help youth and their families make healthy decisions.

“Obesity is a serious, chronic disease that is threatening the lives of millions of Americans, and I am living proof that there is a cure,” said Ostaszewski.

[tweetthis url=”http://donyaeger.com///losing-weight-and-finding-meaning/”]The Great ones always pursue victory despite the odds against them.[/tweetthis]

Ostaszewski’s passion for taking inspirational action began in 1992, when he was cut by the Miami Dolphins. Fighting his disappointment, he decided to go to Canada with a friend for a rejuvenating getaway—and his life was forever changed. Ostaszewski’s friend showed him a memorial of Terry Fox, who led a cancer awareness fundraising campaign by attempting to run the Trans-Canada Highway on a prosthetic leg. Fox died before he could complete his mission, but his motivation lived on in Ostaszewski’s heart.

Now, twenty-two years later, Ostaszewski is using Fox’s experience as inspiration behind his “Riding It Forward” campaign, in which he’ll cycle 2,900 miles across the U.S on a mission to educate others of the dangers of childhood obesity.

The campaign, which began on July 31 in Chevy Chase, Maryland and will conclude on September 26 in Calabasas, California, is a production of Wear Your Soul, a non-profit corporation founded by Ostaszewski and his twin-brother Henry, Wear Your Soul has a dedicated mission of improving the health of our nation’s children by encouraging non-competitive sports to help children improve their physical, mental, and emotional health, and the foundation hopes to pair athletic organizations with at-risk children in danger of becoming overweight.

Along the “Riding it Forward” journey, Ostaszewski will make 42 stops in nine states to engage with local 4-H groups to provide healthy living activities, which include healthy cooking competitions, nutrition quiz bowls, youth yoga, and instructional seminars. At each stop, youth will be invited to make a pledge to healthy living and sign their name on the “Riding it Forward” RV that will be traveling with Joe across the nation.

“The focus of my Wear Your Soul project is equipping today’s youth to live healthy, active lifestyles, which aligns perfectly with the mission of 4-H to empower young people to tackle urgent issues,” Ostaszewski said.

[tweetthis url=”http://donyaeger.com///losing-weight-and-finding-meaning/”]The Great ones know that character is defined by how they treat those who cannot return the favor.[/tweetthis]

Youth who can’t join one of the tour stops will also be able to pledge to run, walk, bike or exercise a certain number of miles and secure donations for each mile they complete. All proceeds will go to support the National 4-H Council’s mission to provide positive youth development—including healthy living programming—to more youth across America.

“We are thrilled to include 4-Hers in this ‘Riding it Forward’ initiative with Joe to provide more avenues for engaging young people as change agents for healthy living,” said Jennifer Sirangelo, president and CEO of the National 4-H Council. “More than 3.2 million youth participate in 4-H Healthy Living programs each year. Not only are they improving their own habits and behaviors, but they are also leading efforts to empower their peers, families and communities.”

Martin Luther King, Jr. once said, “Everybody can be great because everybody can serve.” As Ostaszewski cycles through this country, I am reminded of the impact that a worthy cause can have on the lives of others. That’s part of the mission of Greatness. Take a moment and think about the most important cause in your life. Have you ever felt so passionately about that cause that you—like Ostaszewski—would go to Great lengths to support it? I’d like to hear about the individuals or causes that have inspired you to make a change in your life.

To follow Joe on his journey, or to learn more about Riding it Forward, please visit ridingitforward.com!

If you liked this post and want to inspire someone else, please consider “riding it forward” by sharing with friends and colleagues by using the share buttons below.