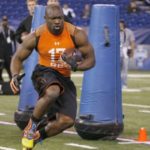 Increase Your Value by Managing Your PACE Performance

Written by Don Yaeger on May 5, 2014. Posted in Chasing Greatness Blog

The NFL Draft starts this week and the players who will be selected have been poked, prodded, measured and analyzed.

They have run 40-yard dashes, lifted weights and shown off specific skill sets for their potential employers. They have taken the Wonderlic — a timed logic and reasoning test that is used to gauge calm and critical thinking in a high-pressure environment.

But in recent weeks I have talked to several top level NFL executives who have shared a new “measurable” that has risen to prominence in their breakdown of players: they are taking note of a player’s PACE …Performance After a Critical Error. They are looking to see what players do immediately after making a mistake!