Posts Tagged ‘what is autism’ 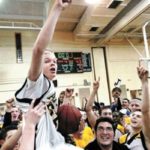 Just Give Me A Chance: Great Leaders Say Yes

Next week marks the 10th anniversary of one of the most exciting (and inspiring) moments in sports. That’s a big statement, I know, but I hope you’ll join me on this trip down memory lane.

On February 15, 2006, Jason “J-Mac” McElwain—an autistic Greece Athena High School senior and varsity basketball team manager—was put into the last four minutes of the final game of the season by his coach COH +2.68%, Jim Johnson. It was J-Mac’s first appearance in uniform and he was hotter than Steph Curry, scoring an incredible twenty points (including six three-point shots) as the game came to a close! J-Mac became an inspiration to millions world-wide. (And has since become Johnson’s assistant coach at Athena High.)

Since that moment, Johnson has been an active supporter for autism awareness and has a deep desire to impact the lives of those on the autism spectrum. He has also become a great personal friend.