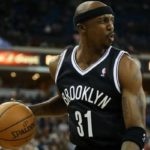 Great Leaders Can Tap Into Their Own Focus With Rituals

Great focus is imperative to success. As the NBA Playoffs begin this week, you’ll find many coaches and players already deep in concentration for the post season.

Someone who understands that amount of focus is Jason Terry of the Sacramento Kings. Terry is one of the most accomplished bench scorers in the NBA, a former Sixth Man of the Year, and played an integral part in the 2010-11 Dallas Maverick’s incredible championship run.

Terry also has the distinction of being one of the league’s most superstitious players.