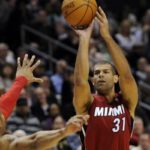 Battier’s Miami Heat had just lost to the San Antonio Spurs in the NBA Finals. For Battier, this swan song of his career didn’t allow him to hold the championship trophy, but he did pick up a piece of hardware that spoke volumes about the years he’s played and what so many of his colleagues think of him.

Battier is one of my favorite players in the NBA. He possesses a grittiness in his defensive play that has consistently fascinated me throughout his thirteen-year career.